With regard to characterization methods of morphologies of rock discontinuities, natural discontinuities are rough and have asperities of different dip angles and heights. The geometrical elements of these discontinuities include the strike, dip (dip direction and angle), continuity (along the strike and dip directions and determined based on the cutting degree), roughness and waviness (amplitude and length). Barton first proposed the concept of the joint roughness coefficient (JRC) in 1973 (Barton, 1973) and established the relationship of normal stress , peak shear strength τ, internal friction angle , and compressive strength with the joint roughness. Then in 1977, Barton provided ten standard profile curves using the standard profile reference method (Barton and Choubey, 1977). Tse and Cruden (1979) took the lead to determine the JRC value using the statistical parameter-based method. They used the slope root mean square (RMS) and the structure function (SF) to estimate the JRC value and provided the fitting relationship of the two with the JRC value. The concept of slope RMS was proposed by Myers (1962) and the parameter can be used for quantitative description of the roughness of rock discontinuities. On this basis, Belem et al. (2000) and Zhang et al. (2009) came up with the expression for the three-dimensional (3D) slope RMS. Zhang et al. (2014) provided improvement based on the two-dimensional (2D) slope RMS and considered anisotropy of roughness of discontinuities, thus providing the improved slope RMS '. The SF is another parameter proposed by Saylers and Thomas (1977) for describing roughness of discontinuities. Chen et al. (2021) found that among various statistical parameters, the slope RMS and the SF are of the highest correlation with the JRC, and they proposed a general method for determining the JRC with combined parameters of any sampling interval. The waviness angle θ is a commonly used index for describing morphological characteristics and studying mechanical properties of discontinuities, whose measurement and calculation methods have been studied by Patton (1966), Guo (1982), Turk and Dearman (1985), and Belem et al. (2000). Initially, the waviness angle θ was only applicable to description of the dip angle of a single asperity on discontinuities. Then, numerous scholars have proposed the angle for evaluating the overall waviness of discontinuities, that is, the generalized waviness angle.

Natural red sandstone blocks collected in the field were used, which were cut into cubic samples measuring 100 mm × 100 mm × 100 mm (length × width × height) with a specific rock cutting tool. Then, the splitting test (Fig. 1) was conducted to split the above samples at the central line, thus obtaining samples of discontinuities of natural red sandstone (Fig. 2). The samples were labeled as No. 1~8. The surface of the natural rock was rough and contained asperities of different dip angles and heights. The anisotropy and diversity of the discontinuities were ignored to some extent. 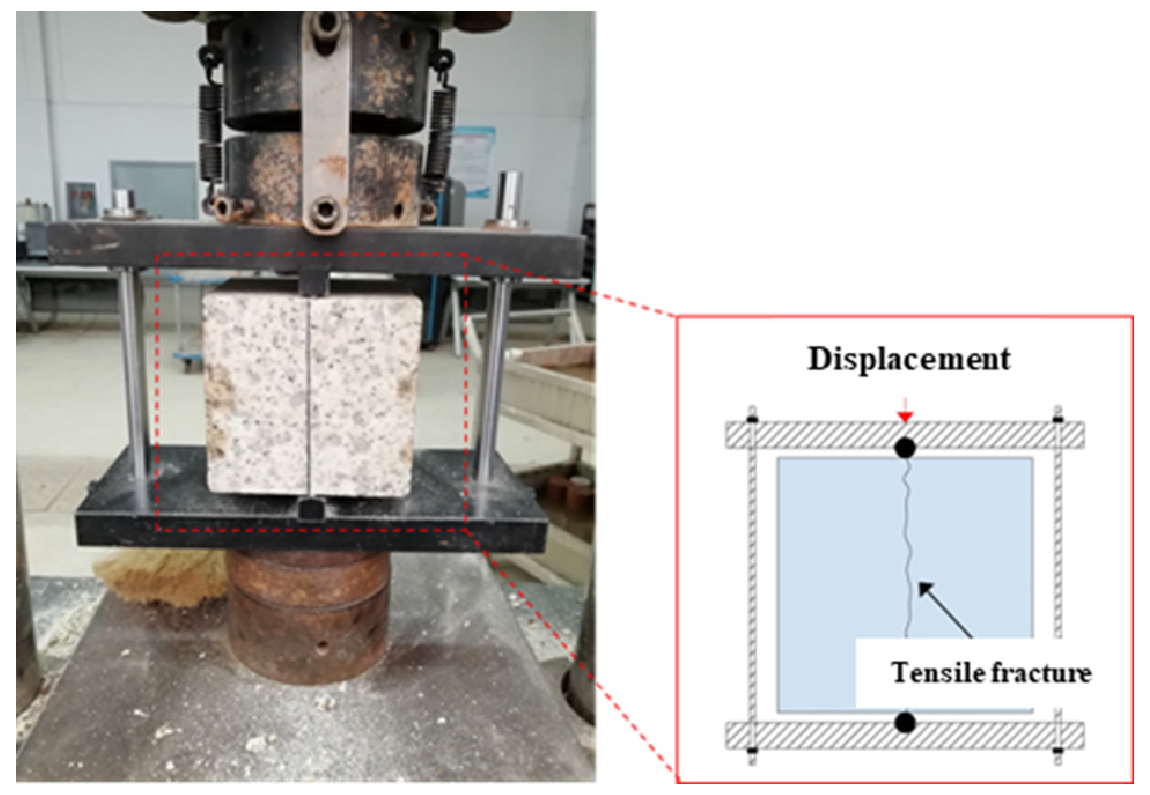 The TJXW-3D 3D surface profilometer (Fig. 3) for rock developed by the research team led by professor Xia in Tongji University was used to acquire data about surface morphologies of samples of discontinuities. The instrument is compared of three parts: a scanner, a frame, and a high-end computer. Therein, as an optical measurement structure and the core component of the instrument, the scanner consists of two high-resolution CCD industrial cameras, two industrial lenses, and a digital grating projector. 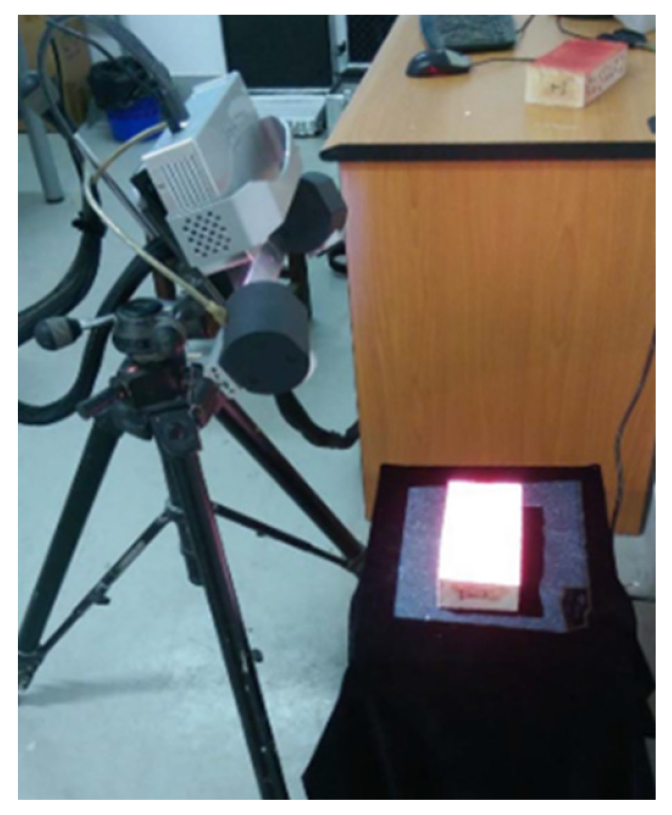 The point cloud data acquired through the 3D morphological scanning test of rock discontinuities are distributed with poor regularity, which is unconducive to subsequent data processing. Therefore, the raw data need to be interpolated to attain equally spaced 3D point cloud data of discontinuities. Tatone (2010) conducted lots of direct shear tests on jointed rock and found that the morphological data can well reflect the waviness of joints when the interval of data points is smaller than 0.55 mm and are enough to capture detail features of local roughness of joint surfaces. The characterization parameter for roughness calculated in this way can be used to study shear properties of jointed rock.

By comprehensively considering the sample size of discontinuities, calculation accuracy and efficiency, the data interval used in the research was 0.2 mm. The original data were subjected to interpolation based on the interpolation algorithm in the MATLAB with 500 sampling points in both the length and width directions of discontinuities and totally 250,000 data points. The 3D morphological data of rock discontinuities were still processed and presented as points, which failed to intuitively reproduce the real morphologies of discontinuities and the points should be further transformed to faces. Delaunay triangulation is able to connect spatial points into triangles that are characterized by the highest proximity, uniqueness, optimality, highest regularity, and locality, so it is the most widely used triangulation method in the practice. Fig. 4 illustrates the interpolation and triangulation results of point cloud data about discontinuities of jointed rock. 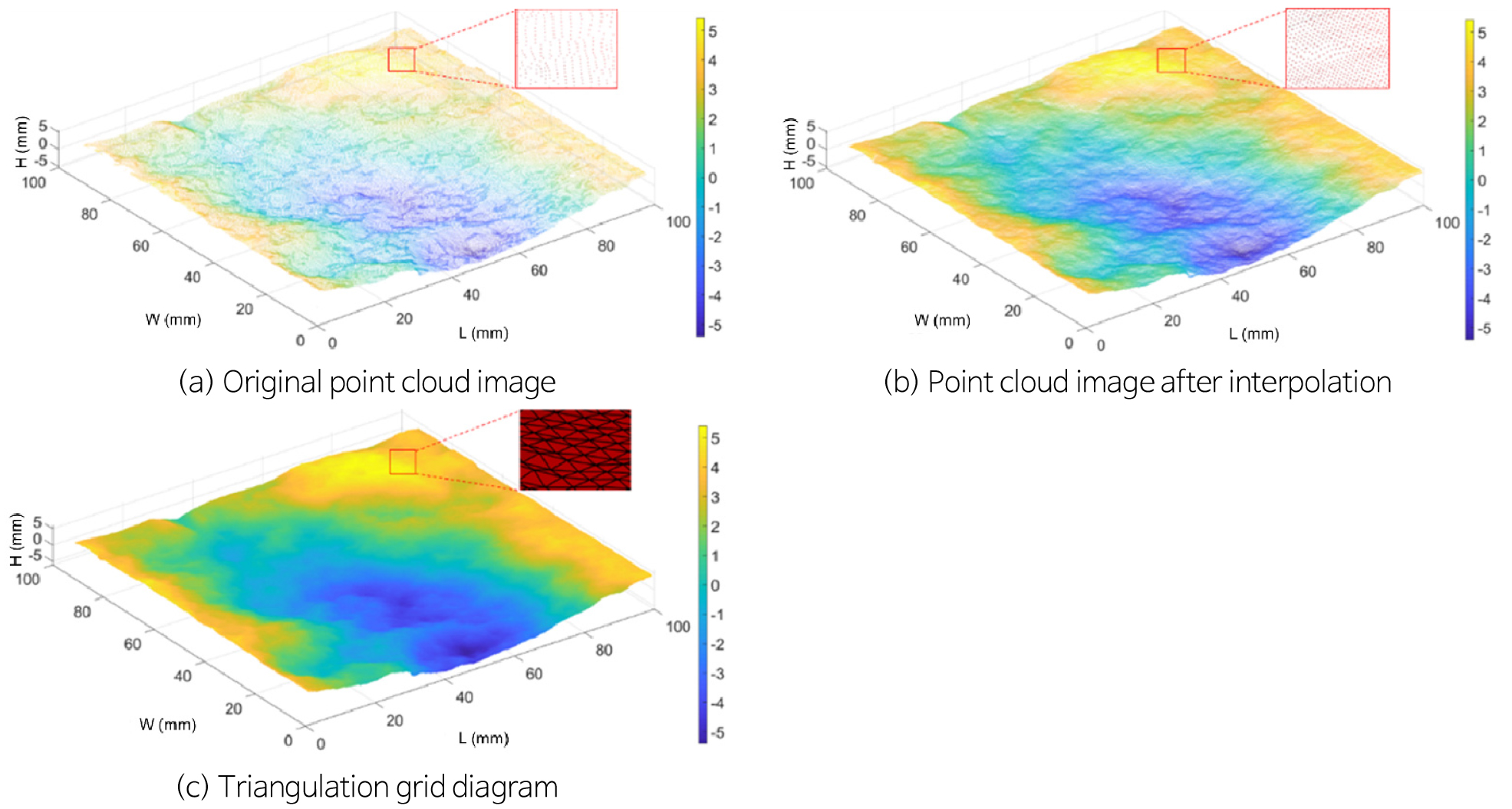 Interpolation and triangulation results for point cloud data (taking the discontinuity in specimen 1 as an example) .

Separation of Waviness and Roughness from 3D Morphologies of Rock Discontinuities

At present, wavelet transform has been widely used in many fields including signal processing, seismic prospecting, fluid turbulence, and image processing. The morphologies of discontinuities of natural jointed rock in the research not only produce all kinds of frequency signals but also include local characteristics such as asperities almost without any period or frequency characteristics. The morphological data can be refined and analyzed at multiple scales and local features or specific frequency can be extracted and reproduced in the space domain by using wavelet transform, thus realizing multi-scale decomposition and synthesis of morphologies.

Discontinuities of natural rock mainly contain relatively large asperities that describe the fluctuation trend of discontinuities and little ones that characterize the roughness, which can be separately described using the waviness and roughness. Previous research has demonstrated that waviness and roughness have different influence mechanisms on the shear mechanics of jointed rock, with the former corresponding to shear resistance of asperities while the latter to the friction resistance.

According to definitions of roughness and waviness as well as suggestions of the International Society for Rock Mechanics (ISRM, 1978), the low-frequency and high-amplitude is used as the first-order waviness while the high-frequency and low-amplitude as the second-order roughness. Then, the mathematical model for 3D morphologies of rock discontinuities can be written as

where, is the Fourier transform of , and .

where, k and j represent the translation amplitude of the function and the number of decomposed layers, respectively; and separately denote the approximation coefficient and the refinement coefficient.

Selection of the Optimal Number of Decomposed Layers

Figure 6 shows the decomposition results of 3D morphologies of rock discontinuities by using the wavelet basis function sym5 (taking the No. 1 discontinuity as an example). The morphologies were decomposed for eight times at the maximum theoretical scale of wavelet transform. A1~A8 represent the approximate signals decomposed with the low-pass filter, that is, the first-order waviness; D1~D8 denote the high-frequency detail signals, namely, the second-order roughness. It is worth noting that the high-frequency detail components obtained through wavelet transform actually include three parts in the vertical, horizontal, and diagonal directions. The signals acquired by subtracting low-frequency data from the original morphologies are directly used as the second-order roughness, for the sake of simplification and more clear results. The 3D morphologies of rock discontinuities are A1+D1 = A2+D2 = A3+D3 = A4+D4 = A5+D5 = A6+D6 = A7+ D7 = A8+D8.

As shown in Fig. 6, most waviness information in the original morphologies of discontinuities has been lost in the approximate signal A of these morphologies with the increasing number of decomposed layers; correspondingly, obvious undulating morphologies occur to the high-frequency detail signal D which shows the low-frequency phenomenon. The result is apparently contrary to the initial decomposition purpose, so it needs to determine the optimal number of decomposed layers by wavelet transform. 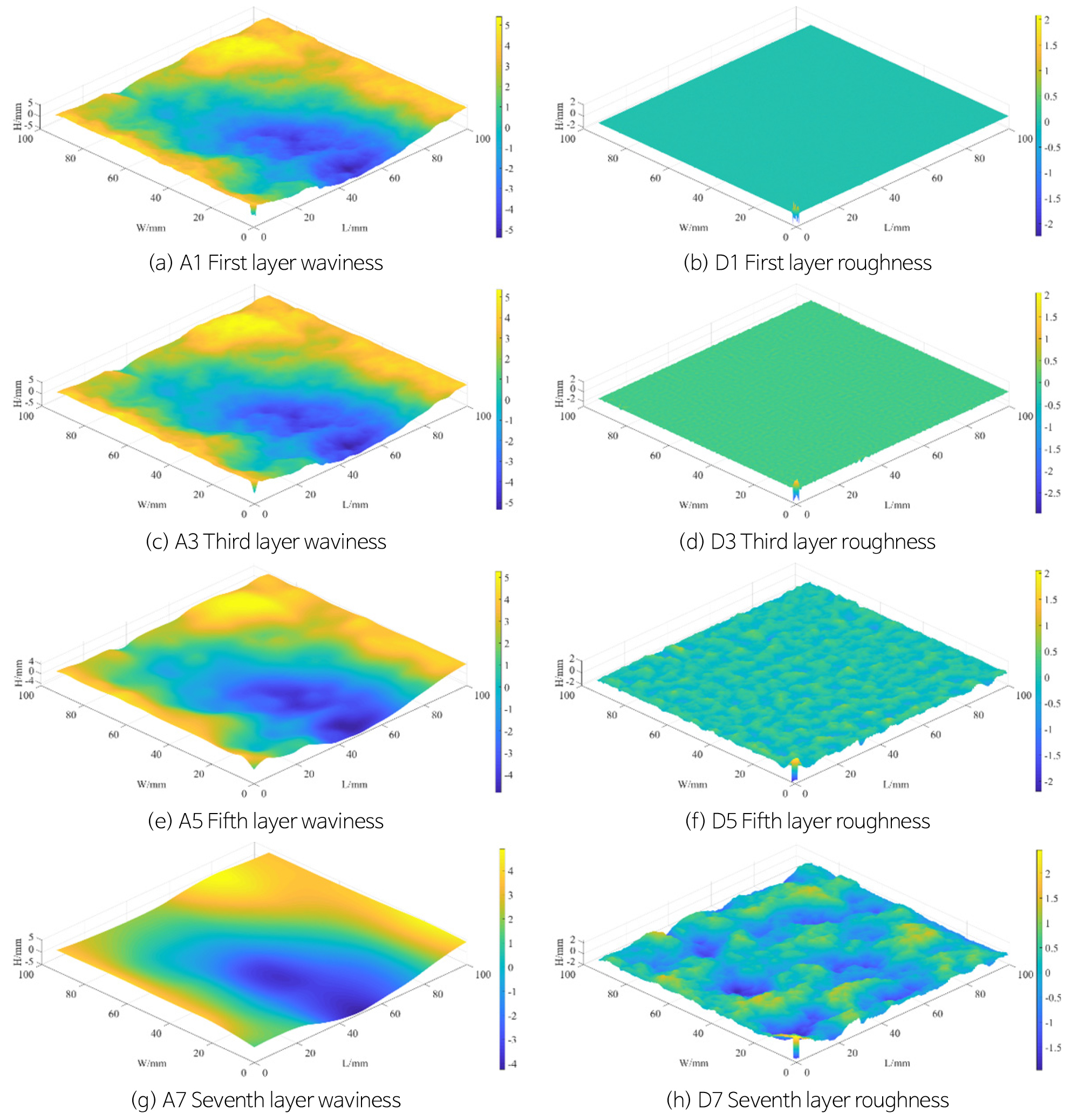 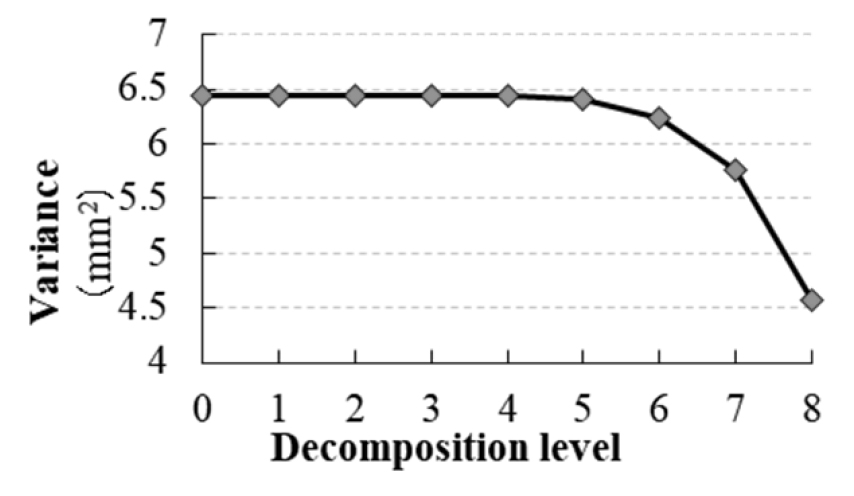 Figure 8 illustrates the distribution frequency histogram of the waviness height when the 3D morphologies of rock discontinuities are decomposed to the fifth layer. The average waviness height is 0.00205 mm (approximating to 0) when fitting with the Gauss function. The correlation coefficient R^2 is 0.999, which is larger than 0.99, indicating that the waviness follows the Gaussian normal distribution after separation. The conclusion agrees with the research results of Zou et al. (2015) and Wang et al. (2016), which indirectly proves the reasonability of the decomposition results in the research. 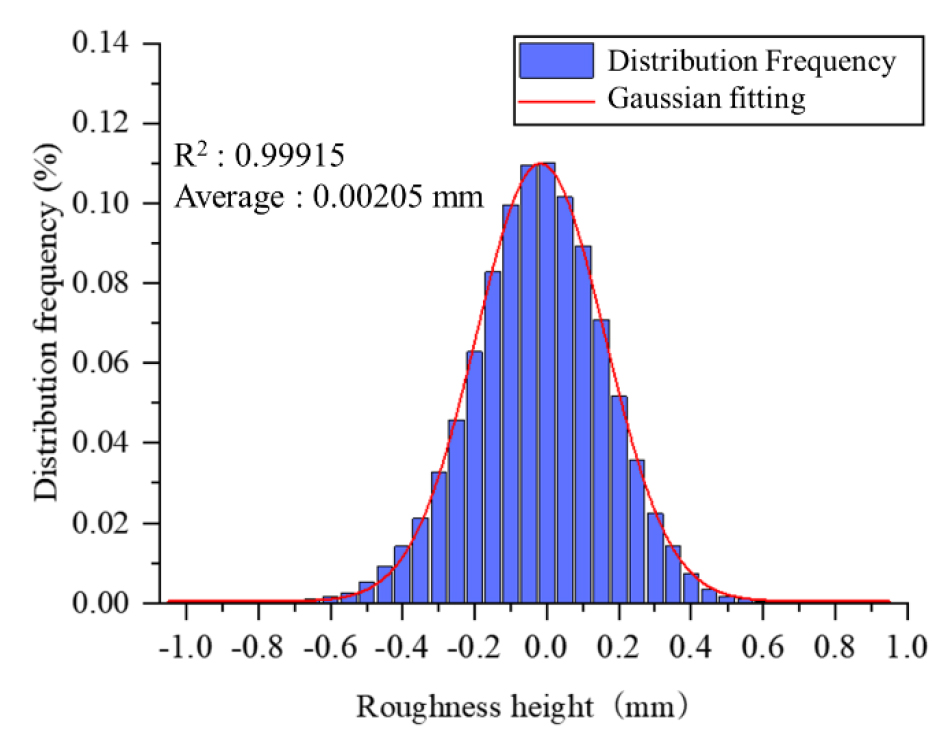 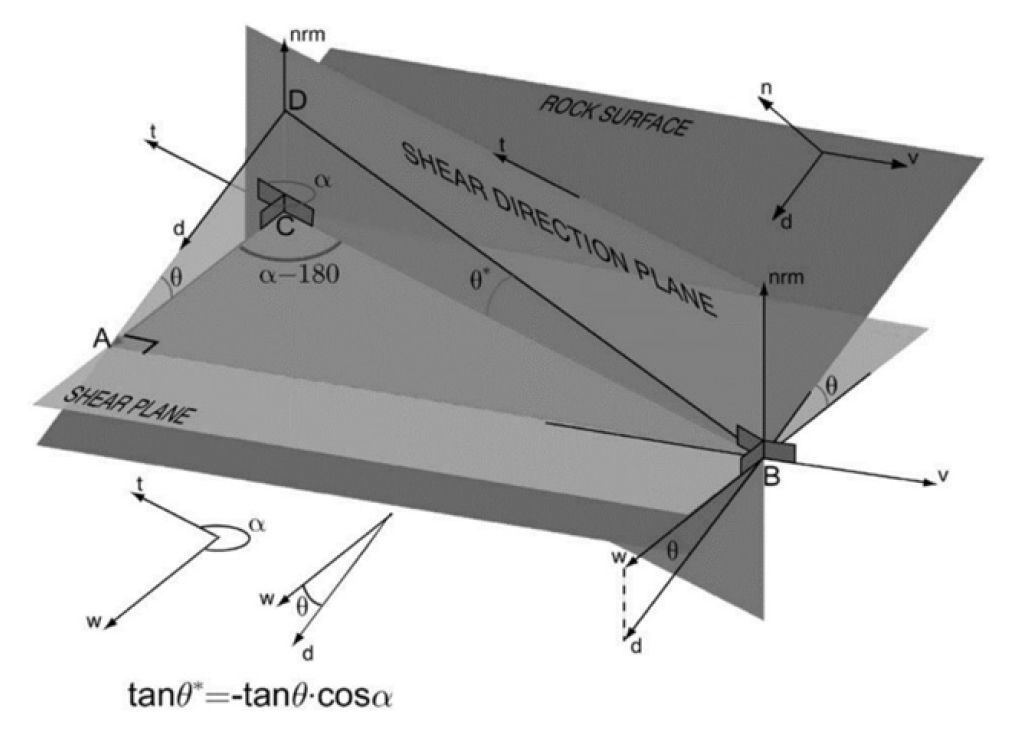 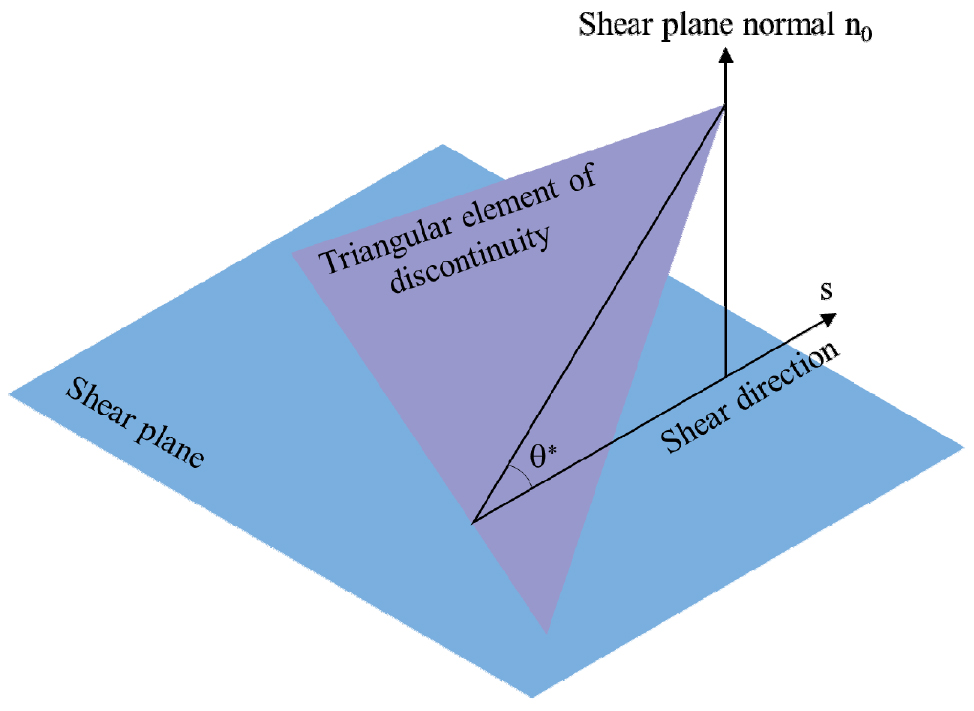 Based on the effective shear angle of triangular infinitesimal elements on the slope-facing plane, the calculation formula for the slope RMS of discontinuities considering the shear direction is proposed: 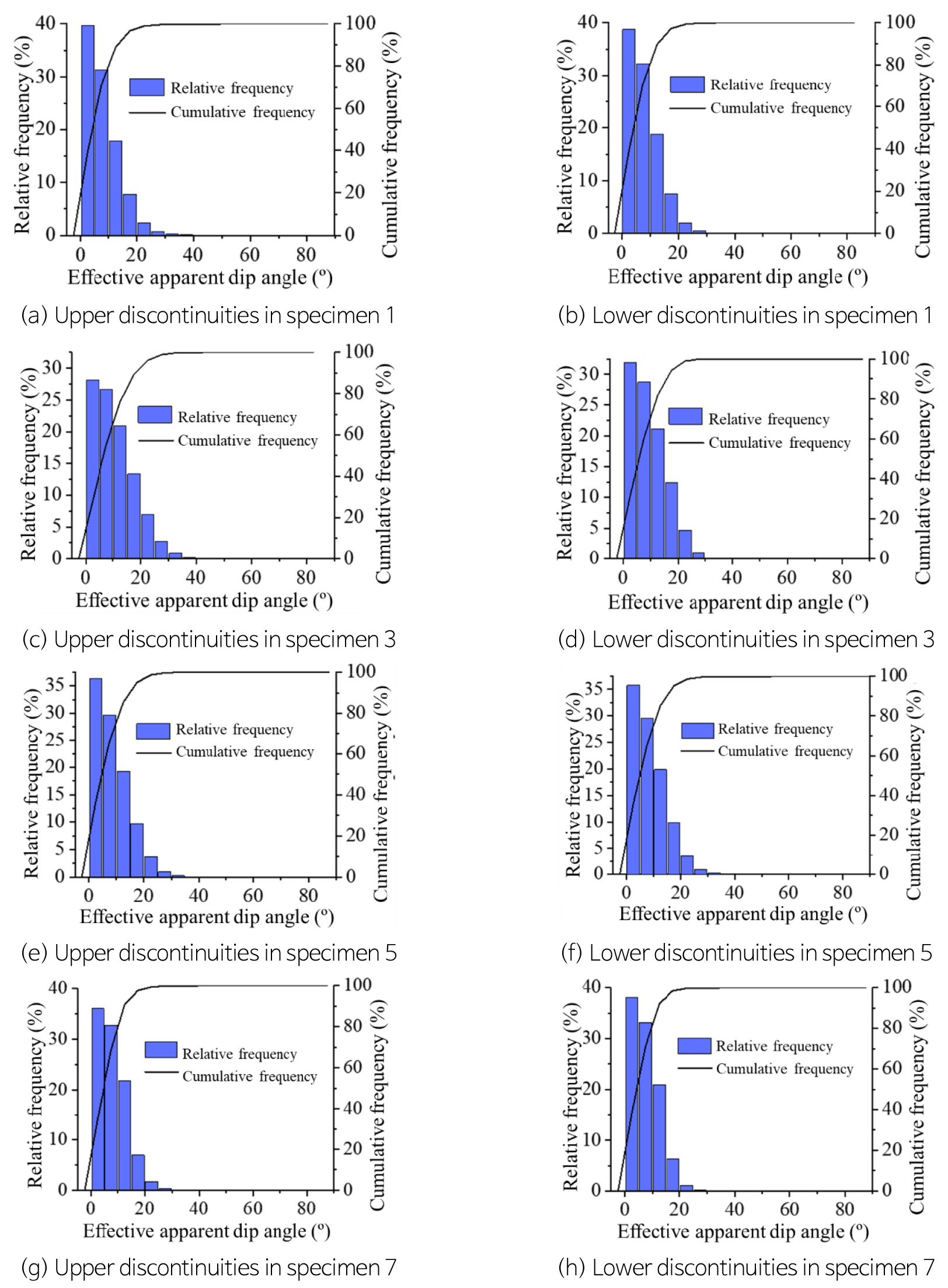 (2) The calculation method for the slope RMS of 3D morphologies of discontinuities considering the shear direction was proposed based on the concept of effective shear angle. Combining with the morphology separation results, concepts of slope RMSs of waviness and roughness were put forward.