We conducted a fundamental study on geological and rock detection via drone-based hyperspectral imaging on various types of small rock samples and interpreted the obtained information to compare and classify rocks. Further, we performed hyperspectral imaging on ten rocks, and compared the peak data value and reflectance of rocks. Results showed a difference in the reflectance and data value of the rocks, indicating that the rock colors and minerals vary or the reflectance is different owing to the luster of the surface. Among the rocks, limestone used for hyperspectral imaging is grayish white, inverted rock contains various sizes and colors in the dark red matrix, and granite comprises colorless minerals, such as white, black, gray, and colored minerals, resulting in a difference in reflectance. The reflectance of the visible ray range in ten rocks was 16.00~85.78%, in the near infrared ray range, the average reflectance was 23.94~86.43%, the lowest in basalt and highest in marble in both cases. This is because of the pores in basalt, which caused the difference in reflectance.

However, most of the geological and rock detection studies were conducted in specific areas on rocks using ground-based hyperspectral images, possibly owing to the difficulty of obtaining hyperspectral imaging data for large areas. In addition, because existing spectral sensors require considerable weight and storage space, only point-by-point analysis is possible and monitoring large areas is challenging.

Most rocks have different conditions and physicochemical properties, and their characteristics of absorbing and reflecting light are different therefore, the distribution range and scale of rocks can be confirmed using rock-specific spectroscopic information. Thus, this work is a fundamental study of geological and rock detection using hyperspectral images. The aim of this study is to perform drone-based hyperspectral imaging on various kinds of small rock samples and to compare and classify rocks by interpreting the obtained information. Thus, hyperspectral imaging was performed on ten rocks and the peak data value and reflectance of rocks were compared. Moreover, the applicability of each rock sample was evaluated via comparison and analysis.

Classifying rocks is the most basic process to be conducted for geological research. Information regarding geological and rocks distributed in the area is also essential at actual sites, such as construction and building construction. However, areas that are difficult to access, such as hillsides and cliffs, cannot be directly investigated. Geological and rock information can be obtained using the geological maps published in the past, but detailed information is required in the field. Therefore, recently, remote exploration conducted using unmanned aerial vehicles, such as drones, has been used in areas where direct investigation is difficult.

Remote exploration can collect information relatively easily from a wide range of areas, where hyperspectral images can obtain information from a variety of materials not visible to the naked eye. It is very similar in spectrum but can distinguish materials based on spectral bands and has the advantage of extracting accurate information. Furthermore, as drone mounting became possible, the utilization area has expanded, enabling remote exploration to the areas that are difficult to access.

Therefore, the purpose of this study is to analyze the intrinsic information of rocks using hyperspectral sensor. The images were taken on ten rocks, and the maximum peak data value (PDV) was calculated by analyzing the values of four points for each rock (Figs. 1, 2). Data value calculated via image analysis indicates spectral radiance. The reflectance minimizes the possible error in the change of solar radiation energy using white reference with reflective characteristics of 99% or more and converts it to reflectance. 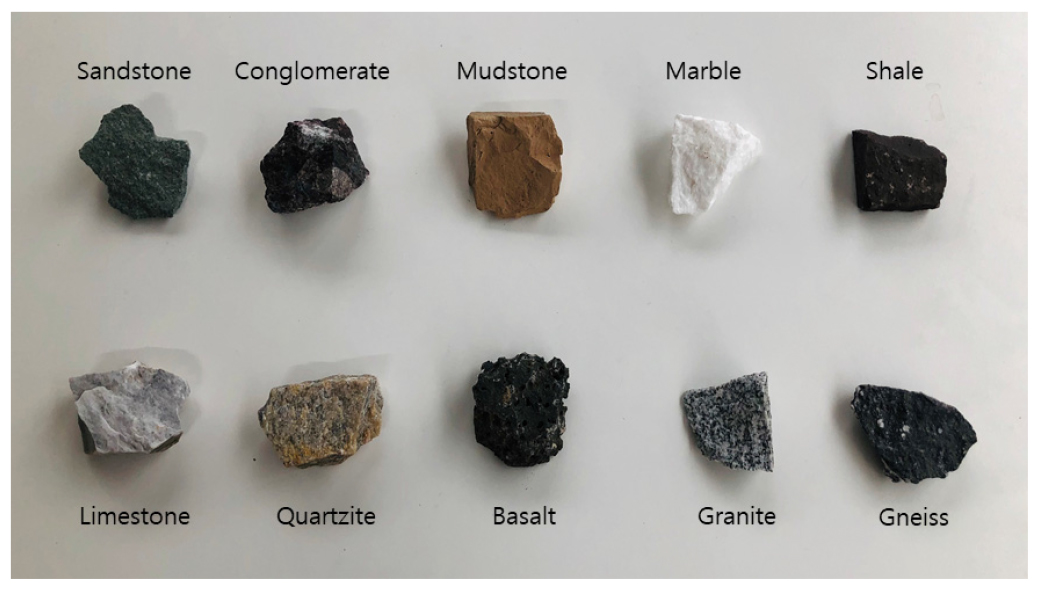 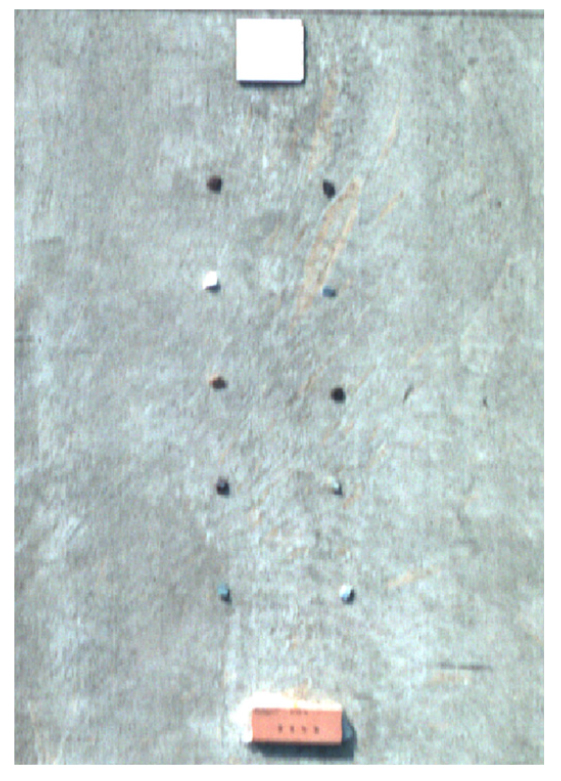 The acquisition of image data using drones is affected by atmospheric absorption and reflection therefore, correction is necessary. However, when spectroscopic information is obtained using a hyperspectral sensor at a low altitude in the field the atmospheric correction was not considered in this study because the radiant luminance generated in the atmosphere or energy reflected to material is rarely affected by the atmosphere.

The hyperspectral sensor mounted on the drones uses Nano-Hyperspec acquired from Headwall Photonics in the United States (Table 1). It has excellent spatial and spectral resolution and high signal to noise ratio, and it can obtain high-resolution hyperspectral images of 270 bands. Moreover, the wavelength bands required by users can be divided into dozens to hundreds for collecting the spectral intensity of each band (Fig. 3a).

Specifications for hyperspectral sensor and drones

For the drone, the Aibot X6 (two-axis gimbal) model was used, which was provided by Aibotix in Germany. It has a loading capability of up to 3.0 kg during flight and can obtain accurate images by wirelessly controlling the GPS reception and manual control (Fig. 3b). The image analysis was performed using ENVI version 5.5 of Harris Geospatial Solutions, enabling analysis, and information extraction of multispectral materials and hyperspectral materials, various images and vector format support and the existing typical image processing basic tasks. 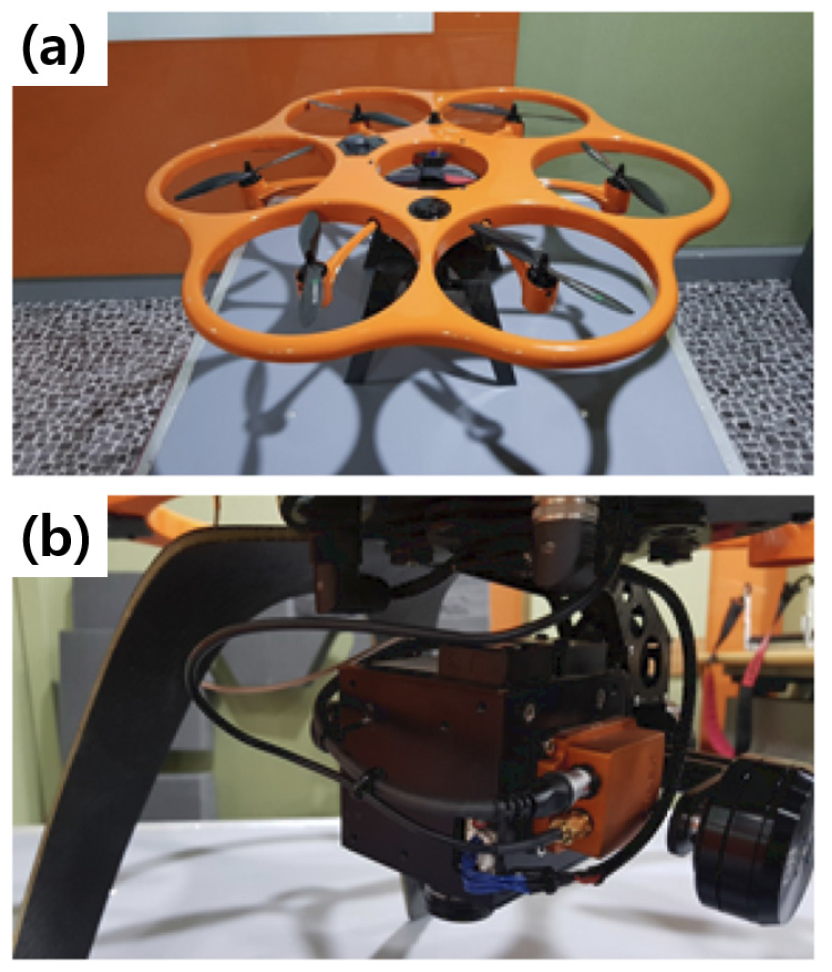 Granite is medium-grained, with more colorless mineral content than colored minerals, and basalt is dark gray and its particles cannot be distinguished with the naked eye, and pores of various sizes are observed. Quartzite is light gray, foliation is observed, gneiss is recrystallized, a little luster is observed and the foliated surface is dark gray containing a very small amount of leucocratic.

The data value and reflectance changes of four points in each rock were compared and analyzed with ten rocks.

Wavelength and data value for each rock point were classified into ten rocks, and analysis showed that similar patterns were shown according to red, green and blue, which are characteristics of visible ray range by rock type (Table 2, Figs. 4, 5).

Data value and average of measurement by rock type 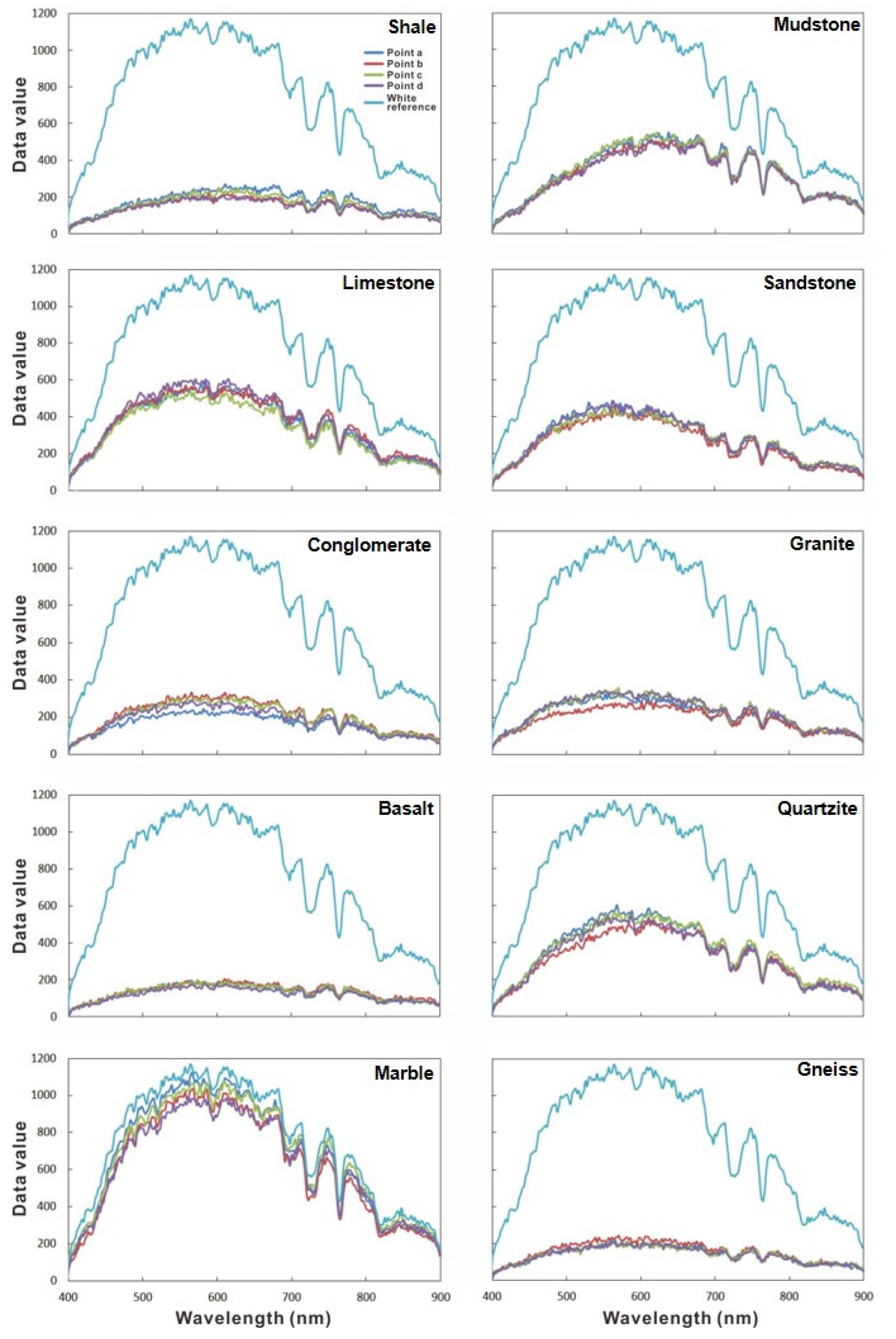 Data value of each rock by wavelength. 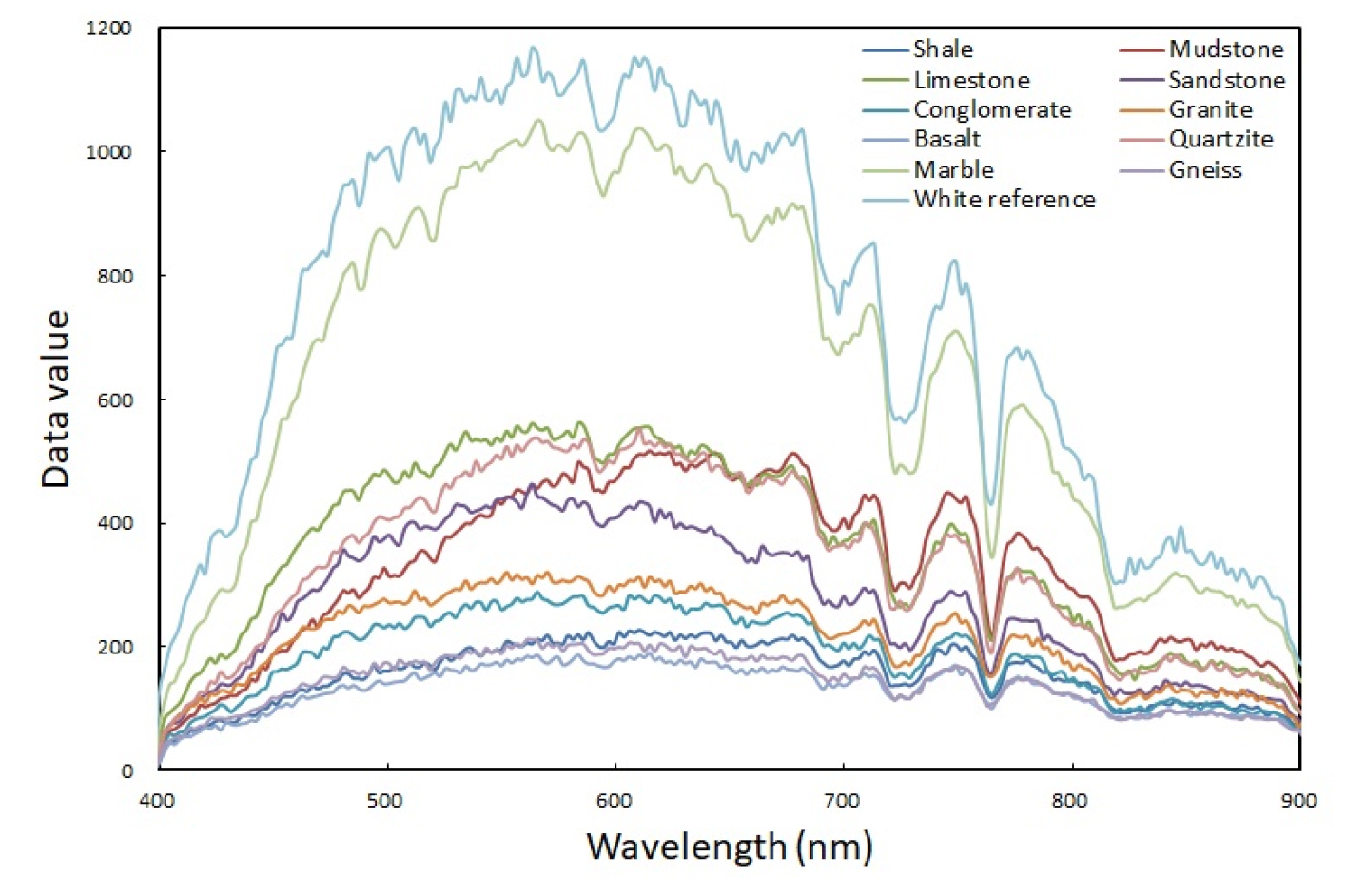 Peak data values and wavelengths for the rock samples. 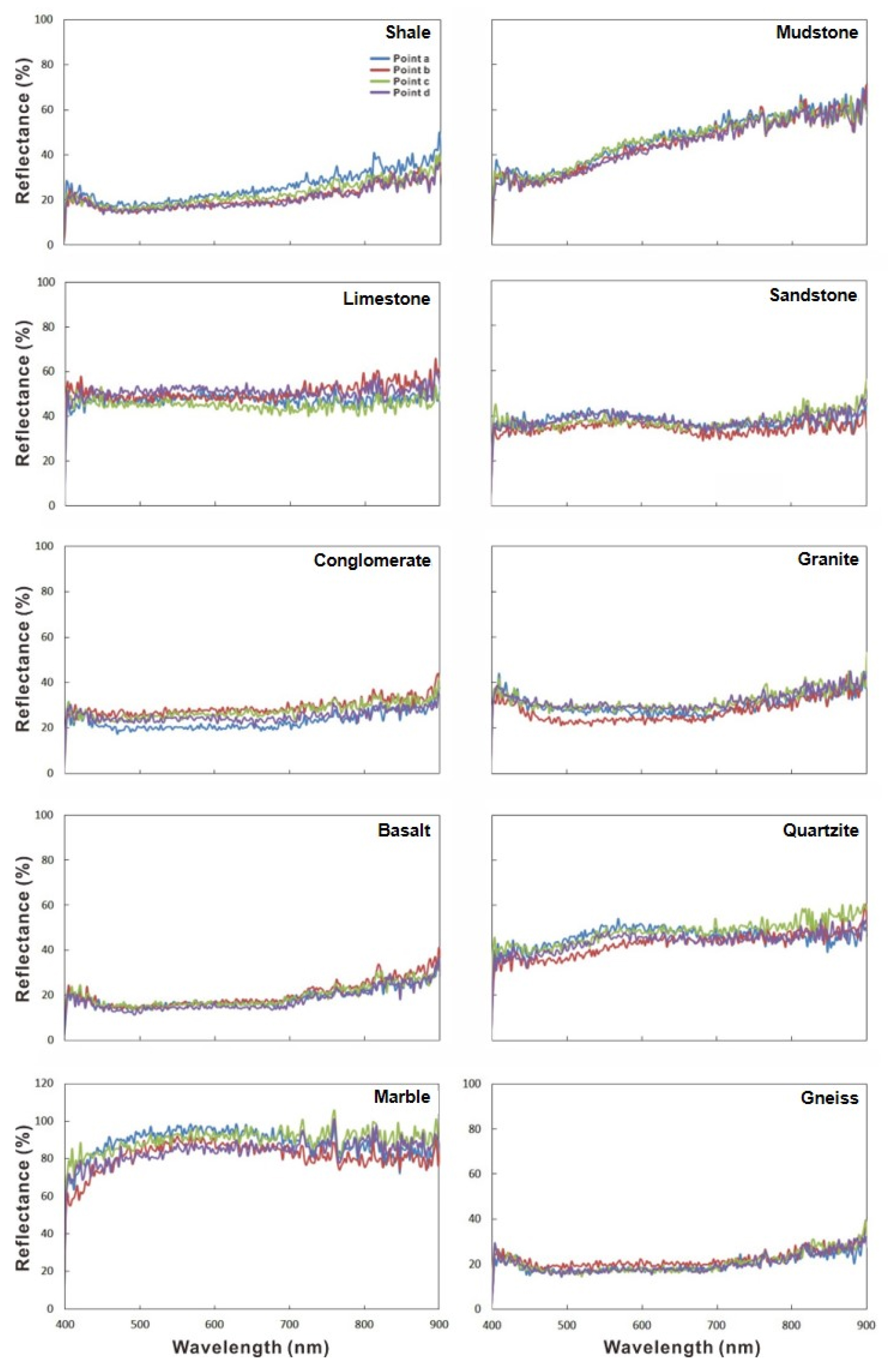 Reflectance graph for each rock by wavelength.

In the visible ray range, the reflectance range of four points in limestone, conglomerate, granite, quartzite, and marble is relatively wider than that in shale, mudstone, sandstone, basalt, and gneiss, or there is an irregular gap between each point (Fig. 7). This suggests that the reflectance range is widened owing to the various colors of the matrix and minerals forming the rock or the luster of the surface. Among the rocks used in hyperspectral imaging, limestone is grayish white and conglomerate contains dark red matrixes with various sizes and colors. Because granite is composed of colorless minerals such as white, black, and gray, the range of reflectance of four points is relatively wider than shale, mudstone, sandstone, basalt, and gneiss. Furthermore, quartzite and marble are uniformly colored but have distinct luster, so the reflectance range of the four points is interpreted to be relatively wider than shale, mudstone, sandstone, basalt, and gneiss.

Reflectance comparison in the visible ray and near-infrared regions

The difference in reflectance was shown to be different according to the color of the particles and components constituting the rock. Among the rocks, basalt and gneiss have similar rock gray, and the maximum data value and reflectance data show that basalt was the lowest among the ten rocks with lower value than gneiss. In the case of basalt, a volcanic rock, there is a pore (up to 5~10 mm) formed by the cooling of the lava, which can be interpreted as reflecting less light than the gneiss (a metamorphic rock) without pores, resulting in a lower data value (radiance).

The results of the study showed that there was a difference in the data value and reflectance by rock type, suggesting that the color of the rocks and minerals is varied or the reflectance is different owing to the luster of the surface. Limestone, among the rocks used for hyperspectral imaging, is grayish white, conglomerate contains various sizes and colors in the dark red matrix, and granite is composed of colorless minerals such as white, black, gray, and colored minerals, resulting in a difference in reflectance. In addition, quartzite, and marble are uniformly colored but have distinct luster therefore, the reflectance range of the four points is interpreted to be relatively wider than shale, mudstone, sandstone, basalt, and gneiss. The average reflectance of visible ray range in ten rocks was 16.00~85.78%, the lowest in basalt and the highest in marble. In the near infrared ray range, the average reflectance was 23.94~86.43%, the lowest in basalt and the highest in marble. This is due to the presence of pores in basalt, which possibly caused a difference in reflectance.